Article by Lucie Stephens, former Head of Co-Production, New Economics Foundation
Introduction
Parental involvement in children’s early years is known to be a significant factor in children’s future wellbeing and attainment. Through necessity parents have previously been heavily involved in the management and delivery of childcare provision, however in recent years this has declined due to political and financial reasons. When parents are relegated to a passive role as ‘consumers’ many benefits are lost.

​The most effective way to realise the full benefit of parental involvement is through genuine co-production, with parents working alongside professionals in the classroom as part of the adult-child ratio, as well as playing a role in the governance, administration and maintenance of the nursery. This kind of nursery, with parents involved in the classroom and wider governance, is what we mean by ‘parent-led co-produced childcare’. 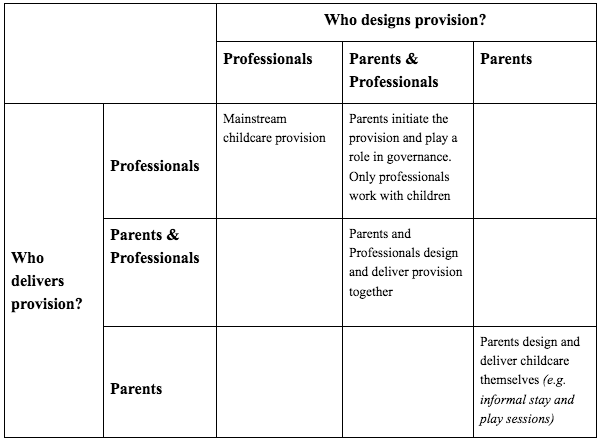 Under the right conditions, having professionally qualified staff working alongside parents benefits everyone: children, parents, staff and the wider community.

Parental involvement in the classroom can improve the adult-child ratio meaning children get more support. A carefully designed division of labour between staff and parents can enable professionals to do more of the critical work that they are qualified to do – around child development, education, and safeguarding – while parents take on more informal roles. Involving parents in the classroom can also bring down the overall nursery wage bill, meaning that it is possible to employ staff with higher qualifications on better salaries than is usual in the sector.

Parents can also benefit from this type of direct involvement in nurseries. By working alongside professionals and other parents they will informally learn new skills and parenting methods. Nurseries that involve parents in the classroom may also choose to provide formal training for parents. Having the chance to meet other parents can also strengthen social networks. Finally, parents also stand to benefit from this model financially, as the cost is reduced making childcare more accessible to more families.

Various research highlights the importance of creating continuity between the home and nursery life of children.[2] The OECD recommend that staff in nurseries receive special training on how to involve parents, as parental involvement improves the ‘ability of parents to help children in their learning activities’.[4] ]Nursery staff and parents working together in the classroom can help to create such consistent approaches to child development and learning.[3]

A UK government report from 2008 highlights that ‘parental involvement in children’s education from an early age has a significant effect on educational achievement, and continues to do so into adolescence and adulthood’.[6] The OECD also make the case for the importance of parental involvement in early years education, arguing that as the number of children in formal educational settings increases, nurseries will have to get better at involving parents.

In a 2012 report, the OECD focuses on parent and community engagement in early years education as the main lever to improve early development and future educational achievement, ‘particularly for children from disadvantaged families’.[7] This report outlines why parental involvement matters, highlighting how it can improve the quality of provision, the quality of parenting and the home-learning environment. Parental involvement in the early years of a child’s life can also improve later academic success, high school completion, social development, and can result in greater social cohesion.

Why now?
Parent-led childcare is not a new idea. It is, however, an idea whose time has come again for two key reasons.
First, balancing work and family is increasingly difficult for parents. Dual-earner families are now the norm, accounting for 68% of couple families in 2014.[11] The percentage of both parents working full time increased from 26 per cent in 2001 to 31 per cent in 2013.[12] Parents are feeling the strain of balancing work and family life: 72% of parents catch up with work at home during evenings and weekends, with 48% saying that working hours regularly get in the way of them spending time with their children. While women still carry out a disproportionate amount of childcare, 47% of men want to downshift into a less stressful job and 38% would be willing to take a pay cut to achieve a better work-life balance (particularly amongst millennials).

Second, the quality of professional staff has been undermined by tight profit margins in the sector, and ultimately, low pay. Despite concerns around parent involvement in the classroom lowering the overall quality of childcare, as discussed above, it can have the opposite effect. This is because involving parents in the classroom is one way of bringing down overall costs, thus allowing nurseries to hire better qualified staff on higher pay. As such, there is no clear correlation between having exclusively professional staff and high quality nurseries – high quality can be achieved through a complementary mix of professionals and parents. This is explored further in the following section on the state of the parent-led childcare sector in England.

The state of parent-led childcare
The dominant trend in childcare over the last 30 years has been a move from parent-led, local authority or charitable provision, to private, for-profit provision.  Examples of parent-led childcare in England are now few and far between. This marks a significant shift from the 1960s, 1970s, and 1980s, when the parent-led playgroup movement was growing and accounted for a significant proportion of overall provision. To understand this shift we need to answer the following questions: what led to the decline of playgroups? And what has replaced them?

The playgroup movement was started by mothers finding community spaces for their children to play together in the early 1960s.[13] This was a response to the almost complete lack of collective childcare for the majority of parents. As the movement developed, playgroups shifted to a model of parents employing staff to do the bulk of the childcare, though parents often continued to manage playgroups and play a role in classrooms.[14] The number of playgroups and the degree of parental involvement in them began to decline in the 1990s. This was due to a number of key policy changes. First, primary schools were encouraged by successive policies to take increasing numbers of 4 year olds, which in turn freed up places for 3 year olds in nurseries, meaning that there was less demand for playgroup places.[15] Second, the Labour government that came to power in 1997 pledged to introduce nursery places for every 3-4 year old, requiring local authorities to plan for this.[16]

Our interviews with existing parent-led and community nurseries show that these types of providers are in decline, struggling to survive in the current policy context. Regulation and professionalisation of the sector have driven up labour costs and tightened profit-margins.[17] In London, many of those that still exist rely heavily on below-market rent to keep their nurseries affordable whilst paying high enough salaries to ensure high quality childcare. This decline of parent-led childcare means losing out on the unique benefits of parents and staff working together. Worse still, the dominance of private, low paid provision means that the ‘professionalisation’ of the sector has not been accompanied by an equivalent rise in quality.

The growth of private – rather than public or community – provision has been accelerated by recent government policy. Under New Labour, councils were encouraged to seek ‘a mixed range of suppliers to help stimulate a varied and competitive market place’.[18] More recently, the government has focused on demand-side subsidies rather than supply-side investment, with the aim of stimulating the childcare 'market' rather than directly investing to improve the quality of provision.[19]

This growth of for-profit nursery chains reduces the choice and flexibility available to parents as well as increasing inequalities in the quality of provision between poorer and wealthier areas. By standardising the offer across all of its nurseries, a chain inevitably reduces variation and choice for parents. And, given the insufficient funding the government provides for its offer of 15 free hours a week to all parents, for-profit nursery chains have more incentive to set up in wealthier areas in which parents can afford to pay for extra hours.[23] This trend is already creating serious inequalities in the quality and availability of childcare.[24]